School Regulations and Rules of Conduct at Grenaa Gymnasium

The short version of the School Regulations and Code of Conduct

The full version of the School Regulations and Code of Conduct

The point of departure for this set of regulations is that our school is a place for academic and social qualifications to be achieved. This requires attendance and active participation by every single student and willingness to engage with one’s surroundings in a positive and mature manner. However, it is important to stress that every single student is treated individually taking illness, social occurrences, etc. into consideration.

Active participation in all aspects of the school life is obligatory for all students. This includes attending classes, handing in written assignments on time, taking tests, participating in excursions at the cost of no more than 80 kr. per day as well as other kinds of teaching in or outside the school premises such as independent work.

If a student has not attended classes due to illness or the like, he/she must write the reason for his/her absence on Lectio (where it says “fravær”) as soon as possible.

Missing written assignments are registered and for every lesson, attendance/absence is registered.
In special circumstances, students may be given an extended deadline. This must be arranged with and approved by the teacher well ahead of the deadline.

Absence registrations are accessible in Lectio.

In case of any planned absence, the student or his/her parent/legal guardian must notify the school well in advance.

If a student continues to be absent after the issuing of a written warning, the student will be called in for an interview at which the reasons for the continuous absence must be explained.
If the Principal determines that the student does not live up to his/her duty of participating actively as a student, the following sanctions may be employed without any previous notice.

The student may be:
• instructed to do missing written work during lessons
• excluded from certain activities
• asked to take tests in all subjects in the year/class in question
• lose his/her right to take exams in one or several subjects
• expelled in particularly serious cases

Every student must contribute to a pleasant school environment by treating others with respect and taking responsibility for one’s own behaviour.
During lessons, other school activities and breaks, this means contributing to a good learning environment by

Generally, food and drink are not allowed during lessons but teachers may give special permission for students to eat/drink.

During lessons, teachers have the overall responsibility for giving all students the opportunity to benefit from the teaching. If a student shows lack of respect or does not show enough responsibility during a lesson, the teacher may ask the student to work elsewhere in the building.
Besides these rules and the following overall rules, there are supplementary rules for certain classrooms, for example music, physics, chemistry and IT rooms. Please obtain these rules from the subject teachers.

The current laws regarding drugs and smoking must be obeyed.
This means that any kind of smoking on the school premises is strictly forbidden (tobacco, e-cigarettes, cannabis, etc.) Both inside the buildings and outdoor school areas.

Drinking alcohol or being under the influence of alcohol or drugs during school hours, or bringing drugs/alcohol to school in any form is strictly prohibited. Any violation of these rules will immediately result in the student being sent home and the school will provide contact to a rehabilitation centre. Furthermore, the student risks being expelled from school.
The school has a contingency plan to take care of students who have problems with alcohol, cannabis and/or other drugs, or who are affected by someone they know who has an abuse.

The school has a general anti-bullying policy aimed at ensuring a good and safe working environment for everyone attending it. Bullying is defined as when one or more people regularly and over a longer period of time or repeatedly subject one or more people to offensive actions that are perceived as hurtful or degrading. Bullying can therefore range from physical harassment to degrading use of social media, etc., and bullying is thus an exclusion dynamic between people in social contexts.

It is also regarded as bullying if the bully undertakes actions outside school hours which affect the victim’s well-being and work at school.
It should be noted in particular that bullying by the school’s students outside school hours aimed at other students is punishable in accordance with the School Regulations and Code of Conduct.

The bullying guidelines are:
• If a situation/course of events arises which qualifies as bullying, the school management, staff and students all have a duty to intervene. This can be by intervening in the actual situations or by reporting it to a teacher/the school management. All information will be treated confidentially.
• Any student or staff member who feels offended or harassed must, where possible, speak out. This can be to the person(s) responsible for the bullying directly or to a teacher/the school management.
• The school management and the working environment representatives are obliged to assume responsibility for ensuring that a solution to the problem is found in dialogue with those involved and that the matter is followed up on over time.
• In the case of more extreme bullying, external counselling may be sought (via DCUM – the Danish Centre of Educational Environment) if the school management deems it necessary.
• A plan of action to address the actual bullying must be in place within 10 days. If this does not happen, students are entitled to submit a complaint to the national institute for learning environment (Dansk Center for Undervisningsmiljø).

Alcohol and drugs are forbidden on intro-trips.
The school regulations and rules of conduct must always be obeyed, also when the teaching takes place in other locations than the school itself.
On excursions or study trips, students must obey the rules concerning alcohol outside school hours that are agreed upon between management, teachers and students. Teachers’ instructions and agreements must be followed, and improper behaviour may result in being sent home at your own expense.
Excursions for which you pay no more than 80 kr. per day are obligatory.
Excursions and study trips for which you pay more than 80 kr. per day are voluntary, and students who choose NOT to participate, MUST attend lessons arranged by the school instead. (cf. act 880 § 46 part 5)

Students have free access to the school computers and internet for academic purposes.
The school’s IT-equipment is meant for teaching and must be treated with care. At the beginning of each lesson, cell phones must be turned off and put in the student’s backpack. Laptops/tablets must be closed. It is entirely up to the teacher to decide whether laptops, tablets and cell phones can be used during lessons and for which purpose.
Any private use of computers, tablets and cell phones during lessons is prohibited and if a teacher estimates that a student is disturbing the teaching, the teacher is allowed to confiscate the equipment which can be collected at the office after the lesson.
Sanctions are described below.

Plagiarism and academic dishonesty is used to provide a student with an unlawful advantage.
Plagiarism is when the student hands in written work that he/she has not written him-/herself, unless the sources are stated. It is not wrong to quote others, but the crucial point of the matter is whether the student has honestly made known what he/she has done.

Sanctions can only be carried into effect based on a concrete evaluation of a student’s situation, illness, social occurrences, etc., and following the written warning. However,
in particularly serious cases or in case of repeated violations of rules, sanctions may be carried into effect without preceding notice.
The sanctions can also be carried out if a student has neglected rules of general order and social behaviour.

The student may be

Students who violate school and/or boarding school rules regarding drugs will be expelled from school.

If the Principal finds that a student does not meet the requirements for active participation in his/her studies, the Principal may suggest that the SU-board takes away the student’s right to receive SU until he/she is actively studying again.
This is not a sanction as such since any complaints will be treated by the board of appeal for SU (Ankenævnet for SU) unlike other complaints that will be treated by the Ministry of Education.

Students are obligated to keep themselves informed about the rules sent to them via e-mail ahead of every exam period.
The personal exam plan for every student will be announced on Lectio, and students must keep updated about dates, subjects, times, as well as any changes that may arise. The exam plan is updated for the coming week every Thursday evening. Should any changes occur after this time, the student will be contacted.

If a student is prevented from attending an exam due to illness, the student may take a make-up exam. The illness must be documented by a doctor’s statement. The student must inform the school of the illness between 8.00 and 8.30 on the day of the exam.

At an exam, plagiarism results in expulsion from the subject in question. A new exam cannot be taken until the following school year.

Promotion to the next class

A student is entitled to be promoted to the next class if he/she has a grade point average of at least 2.0, based on exams, end-of-year-tests, large written assignments, projects, etc. In IB it will be assessed whether the student will be able to pass his/her final exam.

If a student has not achieved at least 2.0 at the end of the school year, the school is entitled to deny the student the right to be promoted, provided that it is evaluated that the student has not had benefitted sufficiently from the teaching, despite continuous evaluation. The student will have the opportunity to raise an objection before the final decision is made by the Principal.

In the case of a complaint against sanctions for repeated breach of the School Regulations and Code of Conduct, as well as exclusion from teaching, or prohibition from bringing certain items to the school, the complaint must be received within five days of the sanction having been instituted by the school, cf. section 5.2, as well as section 3.1, nos 1–3 of Regulation 1077 of 13/09/2017.
The complaint should be submitted in writing to the Head of School who will reach a decision/forward the appeal to the Danish Ministry of Education together with her own statement regarding the case. This statement may be commented on by the complainant within five days. The comment will be attached to the complaint sent to the Danish Ministry of Education.

The school must provide you/your guardian with complaint instructions containing the relevant sections of the law and/or executive order in force.

Rules governing complaints in connection with examinations are stated in the Examination Order.

This version of Grenaa Gymnasium’s School Regulations and Code of Conduct was adopted by the Board on 8 December 2017. 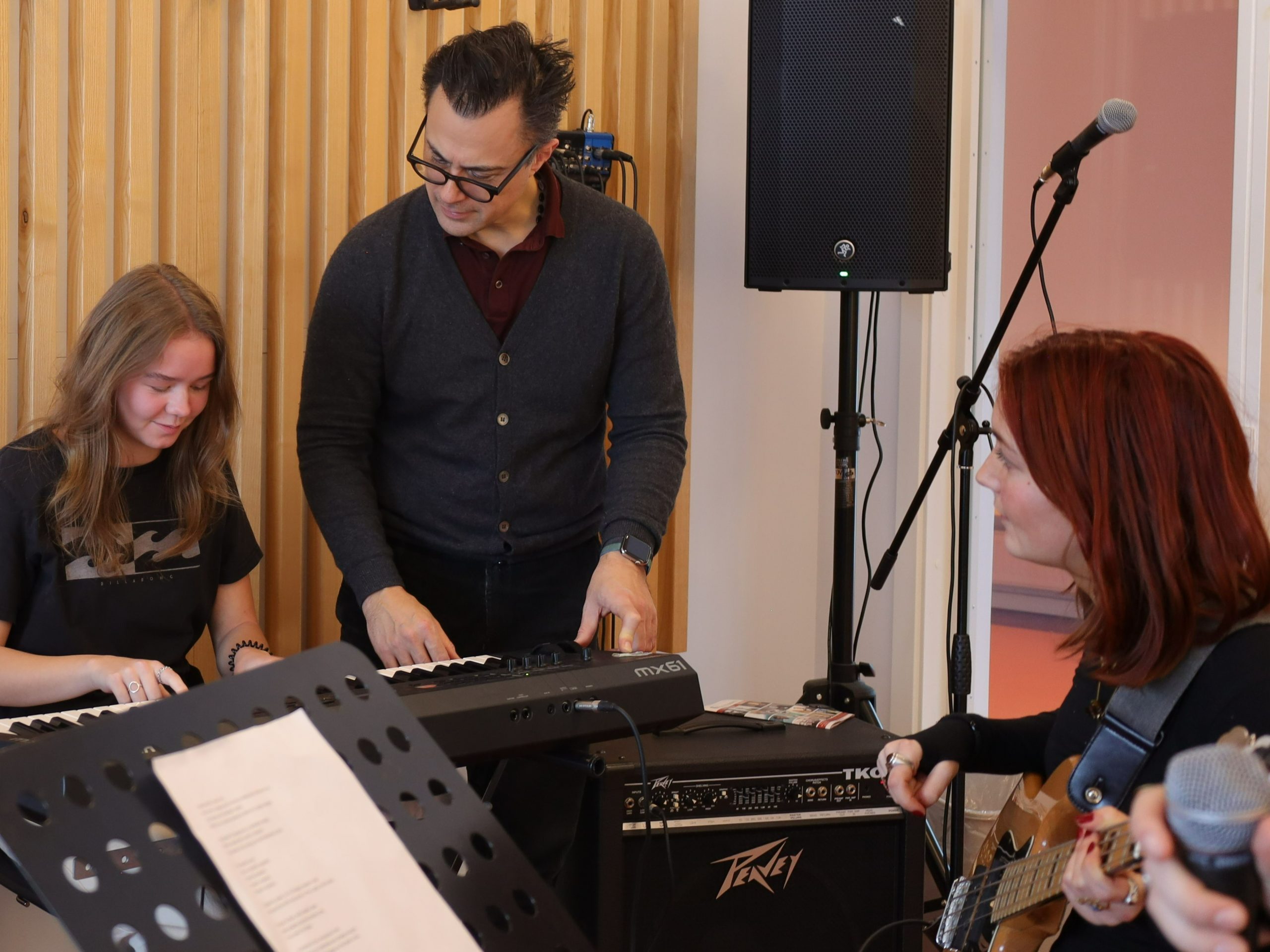