Many things will influence a person during upper-secondary education, but you might only be able to identify a few of them. You are exposed to teaching by several teachers, a great number of students, an environment and manners, all of which will somehow contribute to shape you as a person. Important sources of influence are the physical surroundings, e.g. the architecture and the art surrounding us on an everyday basis. 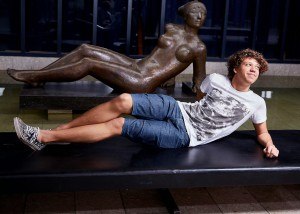 Take a walk through the corridors, open spaces, offices, even the teachers’ toilets, and you will find art from every decade that Grenaa Gymnasium has existed.

For example, monumentally placed in the entrance hall so that no one will miss it, you find Eickhoff’s Navigare, reclining woman [liggende kvinde, ed.] (1967). Countless are the disguises that ”the woman” has been dressed up in at theme events during the years.

And if you go to the canteen, you will for sure catch sight of Signatur (1972) by Richardt Mortensen and Without title (1987) by Erik A. Frandsen.

The vast majority of works, however, are from the 90s and up till today. This is mainly due to the New Carlsberg Foundation having generously deposited 15 and 21 impressive works at Grenaa Gymnasium in 1997 and 2014 respectively. These works of art are of sizes that

Ulrich von Platen’s ‘Without title’ – and the artist himself

the school’s own budget for art would never enable the acquirement of, but that show to the best advantage in interaction with the architecture and with each other.

This applies to e.g. the giant painting Without title (2011) by Cai-Ulrich von Platen neighbouring Viera Collaro’s light works The Ring and Rainbow Fragments (1995).

It goes without saying that the art works are frequently used during lessons.